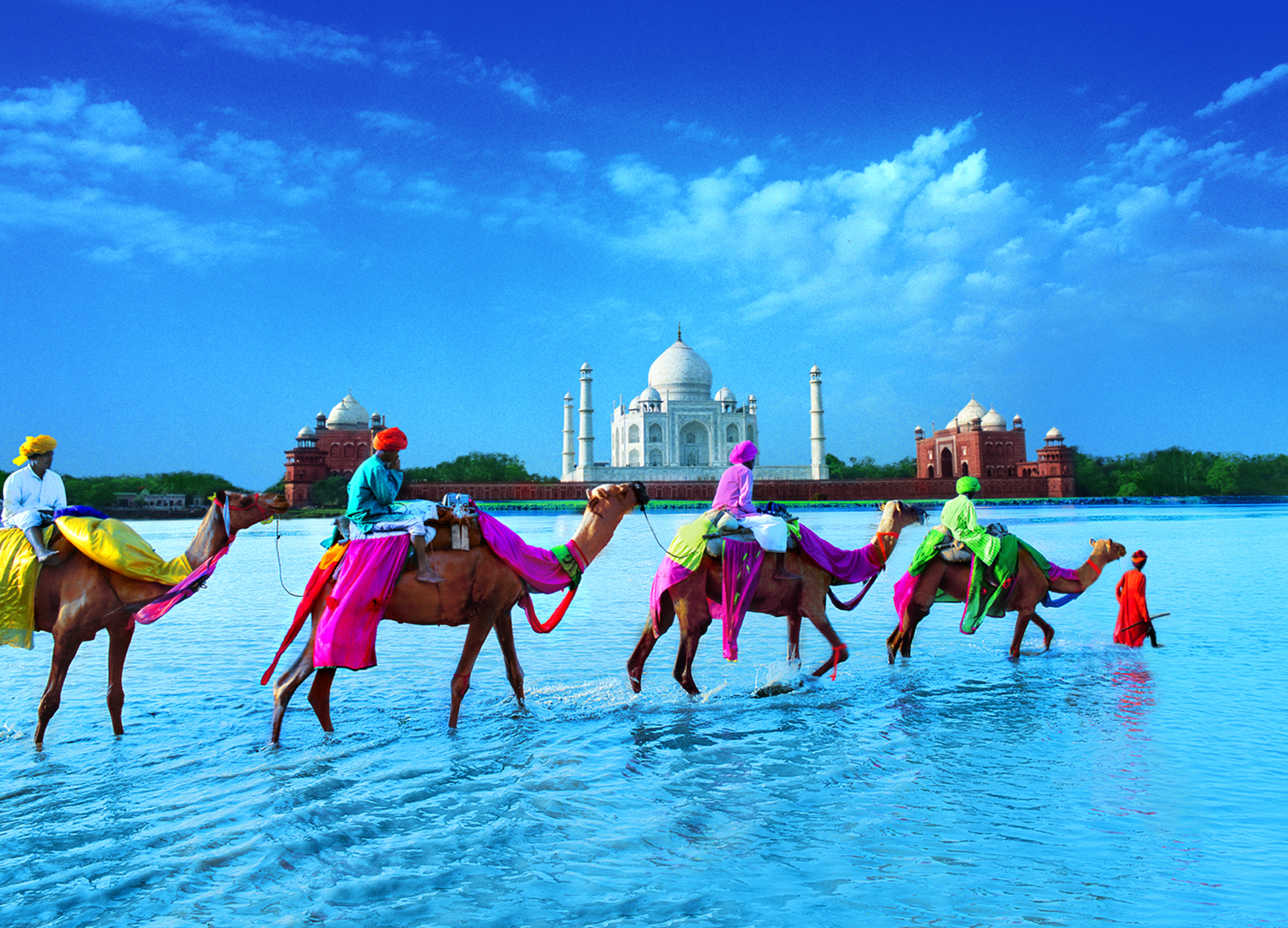 India is undoubtedly one of the most exciting and most memorable trips will be every tourist's wish to visit.

Between the unparalleled Natural Beauty, vibrant colours, and irresistible aromas that hit you from every angle, it is a must to visit to experience the chaos. each corner has its own stories, and you will be immersed in the diverse blend of languages and cultures that make up the rich tapestry of this sprawling Asian paradise. With every region offering you a new breadth of colour, flavour and energy, an India tour is bound to tease you, teach you and surprise you at every turn - setting your imagination alight the second you step off the plane.

India is known as the chest of the secrets of South Asia. country y colours and spices, monuments, historical attractions,
Each visit is different, and every experience that you get is unique.

India is the origin of the great civilizations and rich Asia.
India in the past has been, the center of trade between the empires of Asia, such as China, Iran, Mongolia and the countries of Europe.
India is titled to the land of thousands of religion.
Contrary to the belief India has enormous potential in ecotourism.
traders have called it 72 Nation.
India, the world's second-largest source of having scientists and engineers.

Best Time to Travel to India:

The best time to travel to this country, from the beginning of December to mid-April. In the meantime, India's climate is hot and dry, so be sure to bring enough water

on daily tours to avoid being overheated.
Because of the geographical area of India, the weather will be different in each city

A Must -see Triangle:

Itinerary in details:
Day 01: Home - Delhi
On arrival in Delhi, you will be welcomed by our executive and transferred to your hotel (Rooms will be booked from 1200 hrs to facilitate immediate check-in).
New Delhi, the capital and the third-largest city of India is a fusion of the ancient and the modern. Standing along the West End of Gangetic Plain, the capital city, Delhi, unwinds a picture rich with culture, architecture and human diversity, deep in history, monuments, museums, galleries, gardens and exotic shows. Comprising of two contrasting yet harmonious parts, the Old Delhi and New Delhi, the city is a travel hub of Northern India. Narrating the city's Mughal past, Old Delhi, takes you through the labyrinthine streets passing through formidable mosques, monuments and forts. The imperial city of New Delhi displays the finely curved architecture of British Raj.
Overnight stay at hotel.

Day 02: Delhi
Have a healthy breakfast at the hotel and embark on sightseeing tours of Old & New Delhi.

In Old, Delhi drive past Red fort, built in Red Sandstone this imposing fort is 3 kms in perimeter with the height of the wall varying from 18 to 30 meters at places.
Visit Jama Masjid is one of the largest mosques not only in Delhi but also in India. Completed in 1658 this Mosque has three gateways, four angle towers and two 40 m high minarets. Also, visit Raj Ghat -Mahatma Gandhi's Memorial.

In New Delhi, drive past Janpath, Rashtrapati Bhawan (Hindi for presidential palace) and India Gate is perhaps one of the most impressive structures built in the capital of India. This historic monument was built as a memorial to commemorate the 70,000 Indian soldiers killed in the First World War.
Visit Humayun's Tomb: built in mid 16th century this is an early example of Mughal architecture.
Also visit Qutab Minar. It is a one of the finest monuments in India and is 238 feet in height. Qutab Minar is 47 feet at the base and tapers to nine feet at the apex. The city tour ends with a visit to Laxmi Narayan Temple (Birla Mandir).

Enjoy the Dances of India in the evening. Overnight will be at Delhi.

En-route you will visit the Sikandra - Mughal Emperor Akbar's Mausoleum.

Visit Taj Mahal (Taj Mahal remains closed on Friday), a poem in white marble, built by Shah Jahan in memory of his beloved wife, Mumtaj Mahal. It took twenty-two years and hard toil of more than twenty thousand workers to construct Taj Mahal. The beauty of the Taj Mahal is enchanting and it reflects the marvellous beauty of architecture. Taj Mahal symbolizes the richness of art and architecture of the Mughal period.

After Taj Mahal visits Agra Fort; built by Emperor Akbar on the west bank of the river Yamuna and beautified with palaces and gardens by Jehangir, Agra Fort today dominates the centre of the city. The crescent-shaped fort with its 20-metre high, 2.4-km outer walls contains a maze of buildings that form a small city within a city.

Overnight will be at hotel in Agra.

Day 04: Agra - Bharatpur
After breakfast t hotel. Proceed to Bharatpur.
Bharatpur is the home to the Keoladeo National Park - A paradise for the avian world, and the pilgrimage for the bird lovers; it was known as the best duck shooting resort in the British Empire. But was declared a reserve for birds in 1956 and later upgraded to National Park. UNESCO has listed it as a world heritage site.

The geographical location is ideal as it is on the main North-South avian route of India. Although small in size, 29 sq. km. only, it boasts to house more than 375 species of beautiful birds, and more than 132 of them breed inside the Keoladeo Ghana National Park and nearly every year new ones are added to the list. The sanctuary not only attracts birds from India but also from places like Europe, Siberia, China and Tibet.
Overnight will be at Bharatpur.

Day 05: Bharatpur - Jaipur
Drive to Jaipur - Jaipur was established by Maharaja Jai Singh II (1693-1743) and painted pink by Maharaja Man Singh II when Prince of Wales, later Edward VII, visited Jaipur in 1876. The Royal heritage of Jaipur lives in its architecture and culture. The city in pink is symbolic of the hospitality that reigned in the Rajput culture.

Overnight will be at the hotel in Jaipur.

Day 06: Jaipur
After breakfast, have excursion trip to Amber Fort with Jeep/elephant ride.

En route, make a photo stop at the Palace of Winds (Hawa Mahal). Hawa Mahal is a sample of the perfection of the architecture. Hawa Mahal was built with the pink & red sandstone, beautifully carved and outlined with white border and motif

Amber Fort is situated on the crest of a hill seven miles north of Jaipur is Amber, capital of the Kuchwaha Rajputs from 1037 to 1728. Man Singh I built it in a style to rival Mughal grandeur and opulence.

In afternoon visit City Palace, a combination of conventional Rajasthani and Mughal architecture. City Palace complex has more than a few palatial structures. City Palace is a huge complex, which houses many courtyards, gardens and buildings.

Also visit Jantar Mantar, built between 1716. It is located within the city palace. Jantar Mantar contains a collection of instruments for observing the movements of sun, moon, planets and stars. It was built to develop the interest of the people in Astronomy.
Overnight stay at hotel.

Day 07: Jaipur - Delhi - Home
Breakfast at the hotel. Later drive to Delhi.
Day free to explore the city and finish last-minute shopping.
Have Farewell Dinner before reaching the airport for flight home with sweet memories of India.